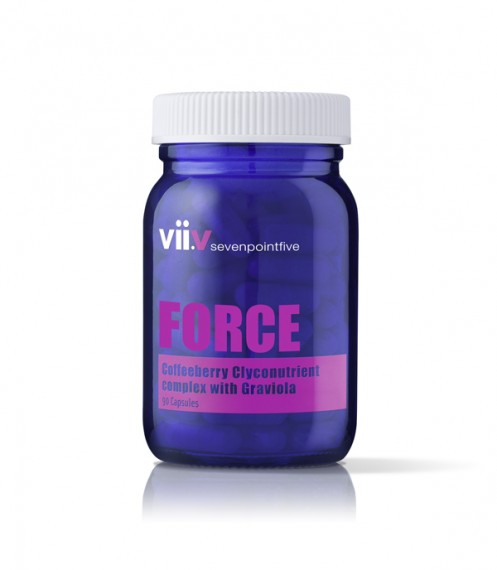 Force is a natural Glyconutrient complex, immune system tuner and potent antioxidant. It has been formulated to help the body prevent and fight serious diseases such as cancer.

What is in Sevenpointfive Force?

Coffeeberry® – The flesh surrounding the coffee bean we know and love has been found to be very rich in antioxidants and glyconutrients. CoffeeBerry® is exceptionally rich in the antioxidants called phenolic acids. CoffeeBerry® also contains many healthy poly-, oligo- and five of the eight essential mono-saccharides. We all know that carbohydrates provide the ‘fuel’ that we use to run our bodies. Until recently, it was thought energy creation was the only role that carbohydrates played in our body. During the last few years, however, emerging science has suggested that eight carbohydrates, Mannose, Galactose, Fucose, Xylose, Glucose, Sialic acid, N-Acetylglucosamine, and N-Acetylgalactosamine, are essential to life because they are the basic building blocks of all biological communication. Scientists believe that this family of eight mono-saccharides is essential in order for our immune systems to function properly.

Graviola – This Amazonian tree has been proven to kill cancer cells by researchers at Purdue University and has been the subject of hundreds of other scientific studies. It also contains glyconutrients.

Cordyceps – This fungus has been used for over 2000 years in Chinese medicine to treat many diseases related to lungs, kidney, and erectile dysfunction. It is also used as an aphrodisiac and treatment for ailments such as fatigue and cancer.

Sceletium – This plant from South Africa has been used since the days of Jan van Riebeek to ease stress and mental fatigue, uplift the mood, decrease anxiety and tension, and give energy. It also has show promising results against cancer tumours.

Baobab – Baobab fruit powder contains a variety of vitamins and minerals. Gram per gram it contains six times as much vitamin C as oranges, twice as much calcium as milk and even more iron than red meat. It is also rich in potassium and has plenty B vitamins, magnesium, phosphorous, and antioxidants. What’s more, the fruit pulp is rich in soluble fibre and it has more fibre than other fruits such as apples, peaches and apricots.

What is unique about Sevenpointfive Force?

Sevenpointfive’s Force is a natural immune booster complex, clinically proven to triple the potency of Natural Killer white cells while also boosting B- and T-cell function. Force’s antioxidant capabilities prevent damage to the body’s cells and can repair damaged cells. The glyconutrients that Force contains are naturally released as the body digests it, providing essential building blocks for life. Force has no harmful side effects, but should be used when caution during pregnancy.

What has Sevenpointfive Force been used for?