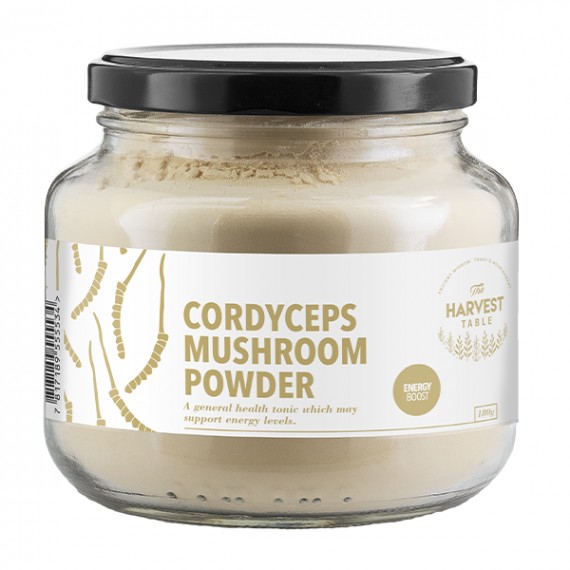 The Cordyceps mushroom gained fame when Chinese Olympic athletes in 1992 credited their successes to taking the mushroom. In traditional Chinese medicine, Cordyceps fungus is touted as an effective herb for supporting healthy circulation, respiration and supporting a healthy immune system response. Due to its ability to possibly support healthy energy and stamina levels, it has also been classified as a general health tonic. Cordyceps may support healthy glandular and lung function which may lead to a healthy allergy and immune system response. It is traditionally used by people who feel short of breath, achy; or depressed from overwork, pollution and bad dietary habits.

In traditional Chinese medicine, cordyceps is used for the kidney and lungs meridians. Cordyceps also increases levels of natural antioxidants and are spoken about in old Chinese texts to possibly promote longevity. This fungus also may also support healthy ATP production in human cell’s which could possibly increase energy levels in those who take it. It is especially good for people who are involved in athletics or enjoy vigorous sports and activities. Athletes who used Cordyceps in their training programs surprised everyone, including sports authorities, when they broke the 10,000-meter world track record in 1993 and shattered dozens of world records in just one year.

Cordyceps have also displayed an ability to support cardiovascular health via a capacity to support healthy lipid levels. This action may support healthy circulation in turn supporting a healthy brain and heart. There have been clinical trials and investigations that show people who suffer from heart health issues may be able to amazingly rebound and begin progressive healing while taking cordyceps along with their physician prescribed pharmaceuticals.

Recent medical research has verified that cordyceps are supportive to the kidneys while they may aid in improving their operational capability. Kidney recipient patients have taken cordyceps and found them very effective at aiding in healing processes.

There is one caveat when using Cordyceps for kidney support; you should only do so under the guidance of a medical professional.

Cordyceps have traditionally been a way of making the body stronger and building up its constitution. Cordyceps may possibly support the development of healthy immune cells within your system. They may possibly act as an extraordinary immunity regulator since they will support the production of the underachieving immunity cells and calm the overactive types. In China, researchers have been investigating the ability of cordyceps to restrain cancer cells.

Some possible traditional uses of our Cordyceps Mushroom Extract Powder may include:


Suggested Uses:
Add into your morning smoothie or shake or into your cooking.  Delicious sprinkled onto a salad.