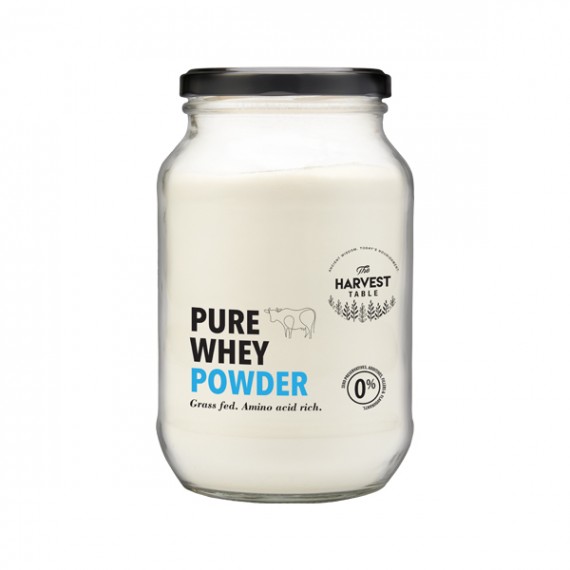 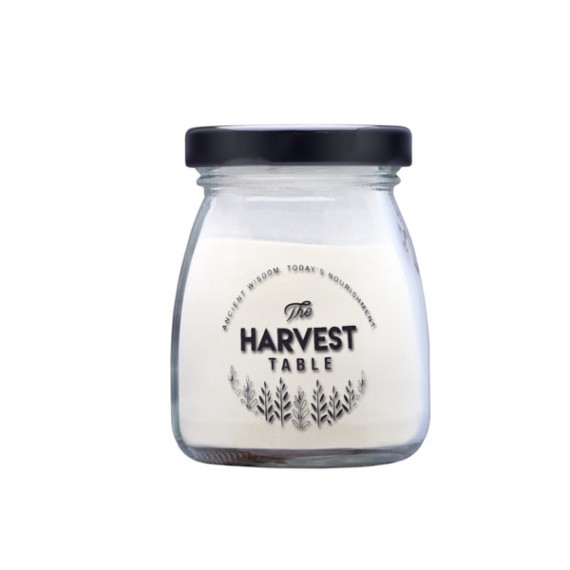 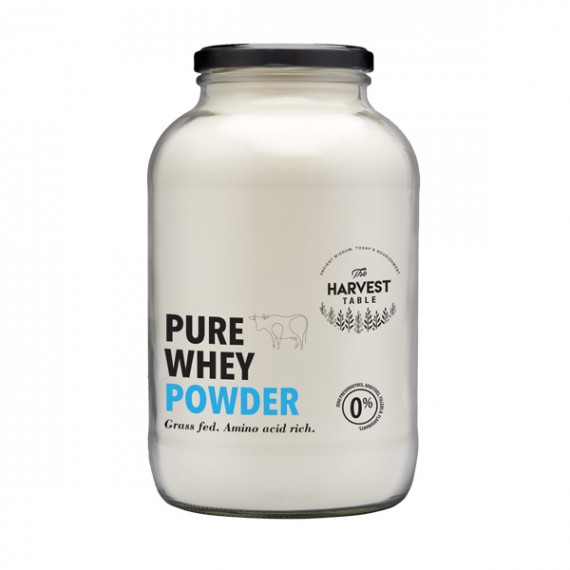 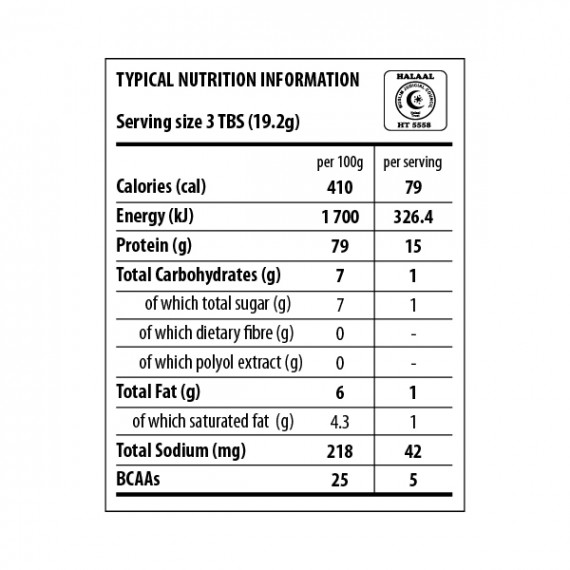 Whey protein is a premium source of protein. It is rapidly digested by the body allowing fast absorption of its nutritional benefits into the blood stream and muscles.  Our whey concentrate is sourced from grass-fed cattle raised in the clean pastures of New Zealand.

Whey Concentrate is the best and least processed form of whey protein because it contains low levels of fat and cholesterol, and higher levels of bioactive compounds in the form of lactose. Because it’s minimally processed, it retains the health-promoting nutrients that are found naturally in whey. You may even find that whey protein concentrate has a more satisfying flavor than other types of whey protein, which is due to its lactose and fat content.

Whey protein is the most efficient way to add protein to your diet without extra calories from carbohydrates or fats. Our whey concentrate is 80% protein this providing the body with what it needs to build muscle and strength, while recovering quickly after a workout.

According to research published in the Journal of Food Science mentioned above, whey protein stimulates muscle synthesis to a greater degree than both casein and soy protein products. Researchers noted that adding supplemental protein to your diet can help promote gains in muscle mass — especially when paired with resistance or burst training — maintain muscle mass even during caloric restriction and slow down the natural loss of muscle that occurs as you age.

A 2007 study conducted at Baylor University analyzed the use of supplemental protein and amino acids on 19 males who exercised four times per week. Researchers found that supplementing with 20 grams of protein, which was made up of 14 grams of whey and casein protein, and six grams of free amino acids led to greater increases in total body mass, fat-free mass, thigh mass and muscle strength compared to those taking the carbohydrate placebo.

A 2014 meta-analysis published in the Journal of the American College of Nutrition examined the effect of whey protein, with and without resistance exercise, on body weight and body composition. Researchers found that adults supplementing with whey experienced significant decreases in body fat and body weight. The results were even more significant among adults who combined whey protein supplementation with resistance exercise.

A study published in Nutrition and Metabolism evaluated the effect of a specialized whey supplement when taken by participants who reduced their caloric intake by 500 calories per day. Compared to the control group participants who also reduced their caloric intake by 500 calories, both groups lost a significant amount of weight, but the group supplementing with whey lost significantly more body fat (6.1 percent of their body fat mass) and showed a greater preservation of lean muscle.

Whey protein seems to affect both ghrelin and leptin, two hormones that help regulate your appetite. Leptin primarily affects energy balance, which helps suppress food intake, while gherlin regulates hunger and plays a role in meal initiation. These hormones work together to tell your body when it needs to eat. Studies show that in obese patients, the circulating levels of leptin are typically increased, whereas ghrelin levels are decreased. Whey helps balance out leptin and gherlin secretion, thereby decreasing hunger cravings and helping you stop overeating.

A 2013 study published in the Mediterranean Journal of Nutrition and Metabolism found that whey protein can help reduce caloric intake as a result of various physiological mechanisms. The amino acid content in whey protein is the main factor that influences satiety, according to researchers.

Plus, whey’s effect on satiety and food intake is mediated by the release of ghrelin and other satiety-inducing hormones. These hormones are released in the gastrointestinal system after protein consumption, which may account for food intake suppression when supplementing with whey protein.

According to research published in the World Journal of Diabetes, whey protein can be used for the management of diabetes symptoms. It slows gastric emptying, stimulates insulin and gut hormones like incretin, which is released after you eat, and works to decrease blood glucose levels. Whey protein can naturally reduce blood sugar levels after meals, especially when it’s consumed a few minutes before a meal. (13)

Whey protein increases glycogen, which is a source of energy during exercise or heavy activity, and it enhances the effect of leptin, a hormone that affects energy balance. Plus, because whey is easily digested and accessed by the body, it is converted into energy quickly and can help naturally boost energy levels.

A 2013 study published in the Journal of Sports Science and Medicine found that females experienced an increase in performance markers when they consumed whey protein after resistance training. Some of the performance markers tested in the female basketball players included agility running, vertical jumping and muscle endurance. The improved energy levels and performance are due to the amino acids that are present in whey protein. When the body is lacking sufficient levels of amino acids, that’s when you experience muscle wasting and delayed exercise recovery after a workout.

In a 2014 study published in Medicine and Science in Sports and Exercise, scientists evaluated the efficacy of whey protein on 40 mice during exercise training. They found that whey supplementation improved exercise performance, strength and body composition.

Whey protein helps increase the production of glutathione, the master antioxidant that is found in every cell of your body. Research shows that whey protein is rich in cysteine, an amino acid that’s needed for the synthesis of glutathione. Scientists at Ohio State University found that supplementing with hydrolyzed whey protein isolate increased intracellular glutathione concentrations by 64 percent.

Glutathione helps eliminate free radicals that cause cell damage, cancer and aging diseases, such as Parkinson’s and Alzheimer’s. It also helps protect your body from environmental toxins and drug resistance, and it’s critical for a strong immune system.

Because whey protein promotes the synthesis of glutathione, it works to boost your immune system. Glutathione also boosts the efficacy of other antioxidants like vitamin C, CoQ10, ALA and vitamin E. Whey protein also contains a number of other proteins and vitamins, such as vitamin D, that positively affect immune function and demonstrate antimicrobial activity.

According to research published in the Journal of the International Society of Sports Nutrition, whey protein helps the body recover after exercise, which is important for avoiding impaired immunity, oxidative stress and excessive inflammation. Not only does whey increase the production of glutathione, but it also contains L-arginine and L-lysine, amino acids that promote immune function.

A 2016 study published in the American Journal of Clinical Nutrition evaluated the blood pressure of 42 participants who consumed whey protein powder or maltodextrin (the control) for eight weeks. Those who used whey experienced significant reductions in blood pressure and increases in blood circulation. Whey protein also lowered total cholesterol levels.

Whey protein has been found to increase life span by reducing muscle wasting that’s associated with aging and increasing nutrient absorption without increasing hunger. This is important because as you age, you lose bone mass, cell function and your digestive function decreases. However, whey has been shown to reduce the loss in all of these areas, making it an incredible superfood that slows the aging process.

Storage:
Keep in a jar with the lid tightly closed.

Suggested Uses:
Add 3 Tablespoons to a smoothie or shake in the morning.  Can also be added into cooking.